As part of its ongoing commitment to the nation’s space program, NASA’s medical leadership asked the Institute of Medicine (IOM) to review specific aspects of the scientific basis, policies, and procedures associated with the Longitudinal Study of Astronaut Health (LSAH). NASA created the LSAH in 1992 to address a variety of issues, including both the health of astronauts during space flight and the longer-term health issues that might be associated with space flight and flight training. The IOM Committee on the LSAH held most of its deliberations at the new IOM facilities in Washington, DC, where the group pondered a variety of health care issues related to space flight, astronaut training, and subsequent astronaut health. We spent many hours developing an in-depth understanding of the LSAH, the major risk factors related to space flight and flight training, and the subsequent health of astronauts. The highlight of the committee’s experiences took place at the Kennedy Space Center (KSC) on January 15-16, 2003, when the committee met with numerous NASA scientists associated with the LSAH, all of whom were gathered at KSC for the scheduled launch of STS-107, the Columbia orbiter flight devoted to life sciences. 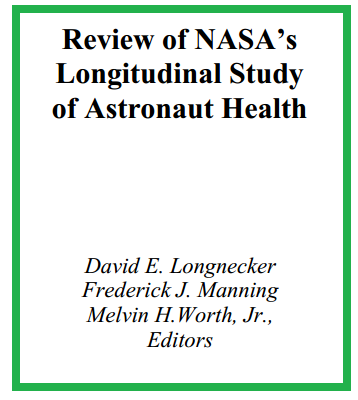