Author khan books Published February 16, 2020
Tags
english
english grammer
ENGLISH GUIDE
LEARN ENGNLISH
Hardcover, Longman Grammar of Spoken and Written English by  Douglas Biber, Stig Johansson, Geoffrey Leech, Susan Conrad, Edward Finegan book pdf free download.
The Longman Grammar of Spoken and Written English is an entirely new grammar of American and British English - from the language of conversation to the language of academic textbooks. There are no made-up examples in this groundbreaking new grammar. The authors began, not with preconceived notions of the grammar of English, but with a huge bank of language data, the Longman Corpus Network.
A six-year research project brought together the linguistic expertise of an international author team - all acknowledged experts in the field of corpus linguistics and grammar.
The result of this research is the present volume. Many points of traditional grammar are confirmed, but now on the basis of much larger amounts of statistical data than ever before. Some aspects of traditional grammar are challenged by this book, and some new findings, not even suspected before now, will surprise and interest the reader.
What makes this book so special is that it turns English inside out. Professor Douglas Biber's research team tagged and parsed the structures in the Corpus. This analysis revealed the degree to which different grammatical features of language vary according to the type of language. The way language is used in conversation is quite different from the way language is used in fiction, which in turn is often very different from the grammatical characteristics of newspapers or academic books.
But why is it different? The Longman Grammar of Spoken and Written English takes its reader into new and uncharted territory for a grammar, by suggesting the reasons why we choose a particular structure in a particular context. 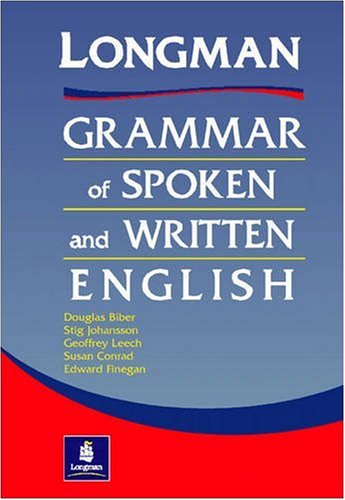