Home english English Synonyms and Antonyms With Notes on the Correct Use of Prepositions James C. Fernald

English Synonyms and Antonyms With Notes on the Correct Use of Prepositions James C. Fernald


The English language is peculiarly rich in synonyms, as, with such a history, it could not fail to be. From the time of Julius Cæsar, Britons, Romans, North men, Saxons, Danes,and Normans fighting, fortifying, and settling upon the soil of England, with Scotch and Irish contending for mastery or existence across the mountain border and the Channel,and all fenced in together by the sea, could not but influence each other's speech. English merchants, sailors, soldiers, and travelers, trading, warring, and exploring in every clime,of necessity brought back new terms of sea and shore, of shop and camp and battlefield.English scholars have studied Greek and Latin for a thousand years, and the languages of-the Continent and of the Orient in more recent times. English churchmen have introduced words from Hebrew, Greek, and Latin, through Bible and prayer-book, sermon and tract.From all this it results that there is scarcely a language ever spoken among men that has not some representative in English speech. The spirit of the Anglo-Saxon race, masterful in language as in war and commerce, has subjugated all these various elements to one idiom, making not a patchwork, but a composite language. Anglo-Saxon thrift, finding often several words that originally expressed the same idea, has detailed them to different parts of the common territory or to different service, so that we have an almost unexampled variety of words, kindred in meaning but distinct in usage, for expressing almost every shade of human thought. 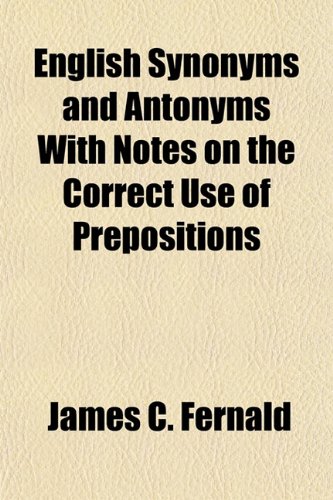