The definitive guide to Modern English usage.Scholarship, authority, and the support of more than 20,000 illustrative quotations from some of the best writers in the language.
Webster's Dictionary of English Usage is a work of unparalleled authority and scholarship from Merriam Webster, America's leading dictionary publisher for almost 150 years.  this work brings to the reader resources that include what is believed to be the world's largest archive of 20th-century English usage,almost 14 million citations (examples of words used in context), collected over100 years from thousands of sources, ranging from the Times Literary Supplement to Scientific American.Webster's Dictionary of English Usage is intended to serve the reader or writer who wishes to go beyond the personal predilections of a particular commentator or the subjective pronouncements of a usage panel. It is ideal for anyone who wants to understand the nature of the problematical usage. 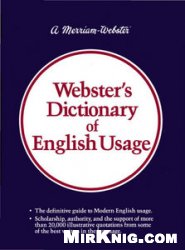