Faiths about Essential attributes of Allah

In this article, you will learn about the basic Faiths or Beliefs about the Essential attributes of Allah. The Description of the attributes of the Almighty is provided in detail below. 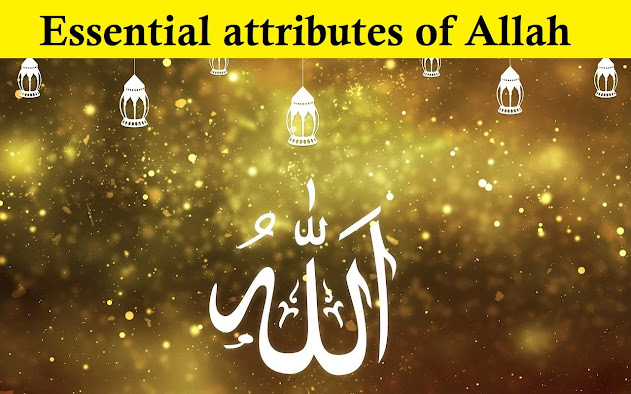 What are the main Essential attributes of Allah?
There are some basic faiths that every Muslim should believe in without any doubt, explained below.
(1) Allah is One, there is no partner in Him, neither in caste nor in attributes, nor in deeds, nor in rules, nor in names. He is the true God and deserves to be worshiped. Allah is Ancient and Endless and eternal, that is, from everlasting to everlasting, and just as His essence is ancient and eternal. Attributes are also ancient and eternal. Everything except the caste attributes is temporary, that is, it did not exist before, then it came into existence. Anyone in the world who considers an object to be ancient or doubts its temporary existence is a kaafir and is out of the realm of Islam.
(2) Allah is alive, the meaning itself is alive and the life of all is in His hands.
(3) Allah is neither a father nor a son, nor is he has a wife. Anyone who calls him a father or a son or a wife for him is not Muslim. We are all Allah's servants and Allah is kinder to us than our parents.
(4) Allah is carefree, rich, and selfless, not in need of anything, but the whole universe needs him.
(5) Allah is omnipotent, No one is beyond His power. He has great power and will do whatever He wants and as He wills. No one has control over it, He is the owner of everything, no one can go against Allah's command.
(4) He is the Hearer, the Hearer of every caller. He hears the sound of ants walking on the ground and the sound of mosquito wings.
(5) He is the Seer, that is, He sees everything, whether it be in darkness, whether in the light, far or near, big or small, not hidden from Him. He sees every detail that is not felt by the microscope.
(6) Allah is the Knower, the Knower of all things. He knows what is happening or has happened or is going to happen in the future. Our conversations, our intentions, which are hidden in our hearts. Not a particle is hidden from him. He knew everyone from eternity and now he knows and will know forever. Things change, his knowledge does not change. He is aware of the dangers and whispers of the heart. There is no end to his knowledge.
(7) Everything is His will and authority. What he wants happens and what he does not want can never happen. No one can do anything without his intention. The birds cannot fly, No particle can move without its command. Everything that happens in the universe happens with his intention, no one has control over it and no one is going to stop him from his intention.
(8) Allah is the Creator of all things, the heavens, the earth, the moon, the sun, the stars, man, animals, mountains, seas and oceans, all animals, plants and inanimate objects, the whole universe, the only Creator of the universe He created us and what we eat. There is no owner and creator of anything except Allah. Every small and big thing is His creation, created by Him. What Allah wants to create, He creates by saying "Kon".
(9) Allah is the Sustainer, providing for the smallest and the largest creatures. He is the Sustainer of all things. He is the Lord of the worlds. He is the Sustainer. Mothers, fathers, rulers, kings, but also angels, etc., are all resources and means.
(10) Allah is a speaker, that is, he also speaks, but his speech is pure from sound, just as his speech is not with tongue. Similarly, we cannot see, and hear Allah with eye and ear. Like other attributes, Allah's words are also ancient. All the heavenly books, scriptures, and the Holy Qur'an are all the words of Allah. Our reading, writing, and sound are temporary and new, but what we have read, written, heard, and memorized is ancient and its attributes are also in accordance with its glory.
(11) Allah is the source of every perfection, of every good, and is free from all defects and evils, what is neither perfect nor harmful is also impossible for him. For example, lying, betrayal, oppression, ignorance, and, immorality are absolutely impossible for Allah.
(12) Allah neither fell asleep nor slept. The one who watches over the whole universe, neither tired nor asleep. His mercy is the support of broken hearts. His promises do not change. He has promised that He will forgive whomever He wills, except for disbelief. He is very patient. He has greatness, but his grip is also very strong. From which no one can escape without the will of Allah. Whatever he does or will do it justice. He is free from oppression. All the benefits and harms of creation are in His hands. Hear the cry of the oppressed and takes revenge on the oppressor. Nothing can happen without his will and intention, Allah becomes happy with the good and angry with the bad.
(13) There is a lot of wisdom in every action of his, whether we understand it or not, The gist of all this is that as far as the intellect is concerned, it is not God, and what is God is not accessible to the intellect.
(14) Every Muslim will see Allah in Hereafter, we will see Allah and we cannot say how we will see.
The above are some basic Faiths about Essential attributes of Allah that every Muslim should believe.