Author khan books Published December 14, 2021
Tags
Islamic urdu
urdu islamic
Surah Yaseen pdf Download With Urdu Translation. This is a colored format with 6 lines and bigger font size. This Surah Yaseen is best for mobile screen. Man is the creator of God's creation and is such a great creature that there are innumerable hidden abilities and if they use all their abilities, and powers they can bring perfection, but Usually, even a thousandth part of these forces and abilities does not come to the destination of action and world of appearance.
There is a For example, if the inner eye that is found inside all of us, if it is opened, we can see many facts and mysteries of the universe, as well as the "inner ear" that is found inside us, if we listen to them. If you break it, you can hear many voices of the kingdom of heaven. In the same way, if man learns the art of activating and awakening many other hidden and esoteric forces, then he can attain his true perfection.
The recitation of the Quran has some visible and hidden relics and blessings (like the external and hidden forces in man), but in particular, a "motivating" tool is needed to reveal and obtain the hidden relics and blessings of the Quran. Surah Yaseen is such a stimulating tool, which also awakens the hidden abilities in man.
Imagine a very elegant and very beautiful "hall" which is mirrored with great style and is decorated with very beautiful chandeliers, lamps and delicate silk curtains but this beautiful "hall" has so much darkness. If you can't see anything, at the same time if only one switch of the electrical system in it is pressed, then all the hidden things and beauties of "Hall" will come in front of you, similarly "Surah Yaseen" It is like this "switch" of electricity which not only reveals the hidden relics and blessings but also awakens the hidden powers of man.
Since most of the believers do not have a deep knowledge of Surah Yaseen and are deprived of its virtues and virtues, they are caught in the trap of hardships and difficulties  However, there are many statements regarding Surah Yaseen in the gatherings of those who are close to Allah.
However, it should not be hidden that the traditions in which this Surah has been interpreted as the heart of the Qur'an are an indication of awakening and mobilizing the hidden forces within man as all the organs of the body move by the "heart" and their In the same way, Yaseen reveals the blessings and energies hidden inside man. This role of Surah Yasin is so important that apart from this, if this Surah has no other character and effect, then this role alone was enough for distinction and pride. Due to its glorious glory, Surah Yasin deserves to be respected and submissive to this sacred threshold for the rest of one's life, to continue to ascend to the heights by Surah Yasin support, and to make contact with the knowledge of the unseen and the realm of heaven under its shadow and blessings. See things that others can't see and listen to voices that others can't hear.
The Prophet (peace and blessings of Allaah be upon him) who knew all aspects of it and its wonders and felt them, says: I want this Surah (Yaseen) to be found in the heart of every one of my followers.

Hazrat Imam Jafar Sadiq (as) has said: Whoever recites Surah Yaseen before going to bed at night, God Almighty will appoint a thousand angels to protect him/her from every Satan regime and all calamities, if he dies on this day or night. Then Allah will admit that person to Paradise. At the time of Ghusl, thirty thousand angels will be present before him. All of them will be within Lahad. They will worship Allah and bestow this reward on the owner of the grave. From the time of burial to the time of resurrection, a light will continue to shine from this grave to the sky. On the day when he will rise from the grave, the angels of Allah will be with him, will talk to him, will see giving smile to him/her, will give him/her glad tidings of every good deed and will even pass him/her by the bridge of serat. Angles will take this person to a place that no one but the prophets, saints and special servants of God can find.
This person will stand in the presence of Allah with the Prophets. At that time all people will be in anguish and fear but he will have no grief with the mourners, no fear with the mourners nor with the supplicants. Then the Lord of the worlds will say to the recitor of surah yaseen: My servant! Intercede for whomever you wants to intercede, so that I may accept and ask for what you wills, so that I may grant, so whatever that person asks will be given.  Whoever will that person want to be blessed will be accepted, he will not be held accountable like others, he will not be arrested like the arrested and he will not be humiliated like the others, he will not be punished for any mistake or misdeed, and he will be given freedom from the punishment, so that that person would come down from the court of Allah and all the people would look at him and say in amazement: Subhan Allah What to say about this servant that there is not a single stain of error is made and is one of the companions of Prophet Muhammad (peace be upon him).

The forgiveness of sins:

surah in the Quran which intercedes for its reciter and helps in forgiving its listener. Listen carefully, it is Surah Yaseen.

The Prophet (peace and blessings of Allah be upon him) said: There is a heart for everything and the heart of the Quran is Surah Yaseen. Whoever recites Surah Yasen, Allah will give reward of reciting Quran ten times (Mirqat al-Mafatih).

It is narrated on the authority of Hazrat Ata ibn Abi Rabah he said I have received the message that Prophet Muhammad (PBUH) said: Whoever recites Surah Yaseen at the beginning of the day, his needs (religious worldly or otherworldly or absolutely all needs) will be fulfilled (Mirqat al-Mafatih).

The virtue of reading at night:

Hazrat Abu Hurayrah (R.A) says that the Messenger of Allah (peace and blessings of Allah be upon him) said: Whoever recites Surah Yaseen in a night, he will wake up in the morning while he has been forgiven (Tafsir Ibn Katheer). 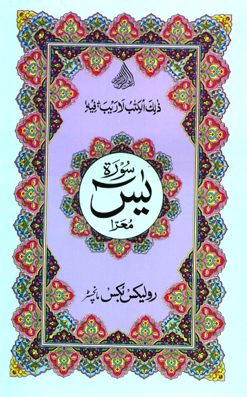