The greatness of Ayat Al-Kursi:

Every single verse of the Qur'an al-Hakim is respectable but the importnce of Ayatul kursi is proved by the authentic sayings of the Prophet (PBUH) and the elders of the religion. By reading it, one can fully appreciate the greatness and sincerity of Ayat-ul-Kursi and it becomes clear to the heart and mind like daylight that this part of the Book of Allah is a gift for the Muslim Ummah. It is the duty of a Muslim and whose disrespect can lead to loss of religion and world. 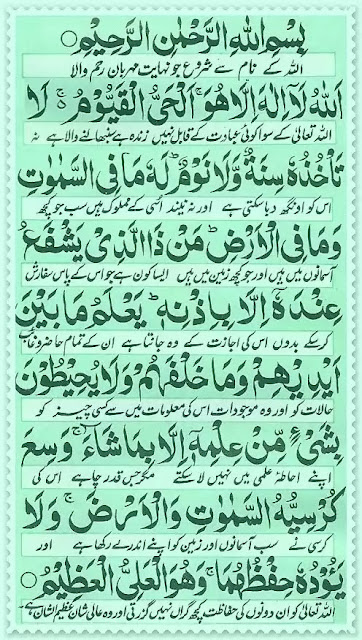 The greatest verse:
Once the Holy Prophet asked Hazrat Ubayy Ibn Ka'b which is the greatest verse in the Qur'an? Hazrat Ka'b replied Ayatul Kursi. The Holy Prophet said to him that exactly Ayatul kursi is the greatest verse in Quran.
Hazrat Abu Zar Ghaffari once asked the Holy Prophet (SAW) which is the greatest verse in the Qur'an. The Holy Prophet replied that Ayat Al Kursi (Tafsir Ibn Kaseer).
Glory of revelation of Ayatul kursi:
Ibn Jarir narrates from Ibn Abbas that Ayat Al Kursi was revealed about an Ansari Companion Hasin Ibn Saalem Ibn Awf. He had two sons and they had come to Madinah to trade in olive oil. Since Hasin had become Muslim, he wanted to forcibly convert his sons to Islam. These Words spread and reached the Prophet Muhammad (SAW).
Hasin Ansari came to the service and asked, "O Messenger of Allah, If a part of my body enter to Hell and I see it. The verse of Al-Kursi was revealed, in which it is clearly stated that there is no rigidity and force in religion (Anwar-ul-Quran).
The key to heaven:
The Prophet (peace and blessings of Allaah be upon him) said: “Nothing but death can prevent a person from going to jannah, if a person recite the verse of Al-Kursi after every obligatory prayer” If he dies will be admitted to paradise. As soon as he dies, he observes the signs and wonders of heaven (Nisani Sharif).
The coverage of God's power:
The verse of Ayatul Kursi is a short verse. But in it, the description of the attributes of Allah is given in a strange way. Allah is present, to be alive, to be hearing and seeing, to be eloquent, to be obligatory, to be eternal. To be the present creator of the whole universe, to be beyond change and influence, to be the owner of the whole universe, to be majestic and glorious. No one can speak in front of him without his permission. Possessing such a perfect power that by creating, and maintaining the whole universe, he does not get tired or lazy. Possessing a knowledge from which no particle or drop of any object remain hidden. It is as if in this short verse, the Allah's power is wrapped in the same way as one wraps the ocean in a bowl. And the most amazing thing is that these are words from Allah Himself. There are 10 sentences in Ayatul kursi.