What does Quran mean ?

Author khan books Published December 19, 2021
Tags
al quran
islamic
quran
The Quran is the last revealed book but what does Quran mean ? Something you may not know. The Holy Qur'an is the great miracle of the Holy Prophet and the ongoing miracle. Everyone believes in its greatness, health and inspiration. This book is a clear proof of the miracles and the charity of the Holy Prophet. The revelation of Quran is a subject which has been written in great detail in the Islamic books, therefore we will adopt a concise and comprehensive way here. That when the rays of intellect and knowledge fall on this ocean of reserves, its wave sparkles but every wave bids farewell with a certain radiance and bounty, then let us first consider the meaning of the word Quran and how was it put together. 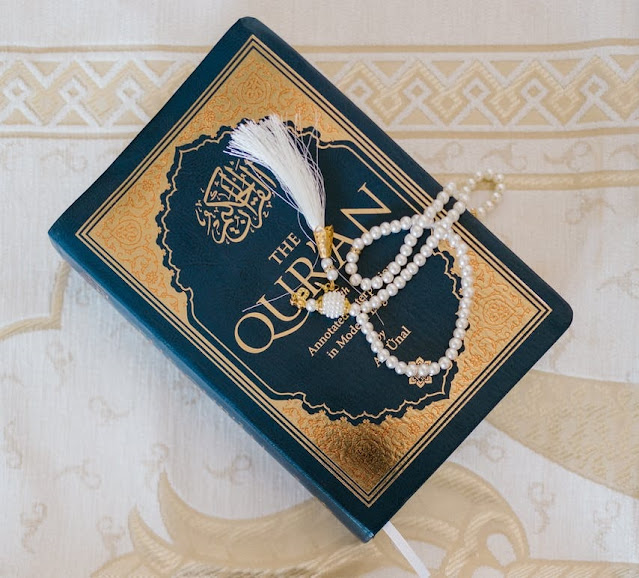 The Qur'an was revealed by Allah Almighty through the angel of revelation Gabriel to the last of the prophets, Hazrat Muhammad (SAW) and all the rules mentioned in it have come from Allah Almighty. The Holy Quran is free from all kinds of distortion. Even the Holy Prophet could not miss a single word in it. In the same way, no creature in the world can make any change in it. Allah Almighty revealed the Holy Quran from the heavens to His Prophet Muhammad so that he could convey its message to all humanity. The Quran is the first source of true faith for every believer. In the Quran, Allah Almighty has arranged the individual and collective guidance of man. The uniqueness of the Qur'an and one of its distinctions is that all its words and all its commands are from Allah Almighty and no human being has any involvement in it and no human being can add or remove from it in any way.
Every single letter of the Qur'an al-Hakim fits in its place with such a great calculation. No writer could have imagined such a subtle calculation in such a big book. These words given below are examples, the number of times each word of the Qur'an is used and its whole background is a vast world of knowledge and gnosis in its place.  If the word world (دنیا ) is used 115 times, then the word of the hereafter (آخرت ) is also used 115 times Similar other opposite words are repeated in the same quantity.

There are many names of Holy Quran including Quran (القرآن), Al-Furqan (الفرقان), Al-Tanzeel (التنزیل), Al-Dhikr (الذکر), Al-Kitab (الکتاب), Al-Shifa (الشفاء), Al-Rahma (الرحمۃ), Huda (ھدی), Al-Haq (الحق), Noor-ul-Mubin (نورالمبین), Al-Mu'izzah (الموعظہ), Al-Hikma (الحکمۃ), Al-Balagh (البلاغ), Al-Qawl Al-Fasl (القول الفصل), Habal Allah (حبل اللہ), Ahsan Al-Hadith (احسن الحدیث), Al-Urwa Al-Wathqa (العروۃ الوثقیٰ), Ibra (عبرہ, ) Al-burhan (البرھان), Siraat Mastiq (صراط مستقیم), Al-Mizan (المیزان), Al-Quran Al-Hakim (القرآن الحکیم), Al-Quran Al-Kareem (القرآن الکریم), Quran Majeed (قرآن مجید), Al-Bayan (البیان), Khair (خیر), Mushaf (مصحف) etc. are famous.
Literal Meaning of the word Quran:
What does Quran mean literally or terminologically? What do Muslims use it for? Sometimes it refers to a particular word and sometimes the whole focus is on the meaning and sometimes it refers to both the word and the meaning. The literal meaning of the Qur'an: the most read book or the most frequently read book. It is the only book that still exists in its original form, and that is why it is the most widely recited book in the world.. The other meaning according to the words from which the word Quran is derived is provided below.
How sweet and meaningful is the word of the Qur'an and how it fulfills the requirements of each of its derivatives. Of course, this name is proof enough that it is a miracle.
Who wrote the Quran and how was it put together?
The non-muslims talked about its arrangement and sometimes they talked about its blessed verses and sometimes they objected to the compilation. While seeing the popularity of this book, the enemies of Islam started objecting to this holy book in different ways. Followers of Islam everywhere responded to them with practical arguments, and never compromised on the authenticity of their religion. And proved that the Quran is a miracle. And there has never been a change and there will never be. Rather, this book will remain in its original state till the Day of Resurrection. The Islamic scholars have given many arguments to prove the Holy Qur'an as a miracle (detail provided below).
The Holy Qur'an was revealed as a guide for every human being in the world and as a mercy for the Muslims. Even after 1400 years, not a single letter has changed in its text and it will not change till the Day of Judgment. The Qur'an is the last revealed book, Which was revealed to the last prophet Hazrat Mohammad (PBUH) in a period of about 23 years.
You should all know that the Qur'an was not revealed in book form. On the contrary, during the 23 years of prophethood, these verses continued to perfume the blessed hAeart of the Holy Prophet (saw), but Jibril Amin used to tell to Prophet Muhammad (PBUH) the order of these verse in which it should be placed. Then, every year during the holy month of Ramadan, Jibrail (A.S) himself recite the Holy Quran to the Holy Prophet. And thus the order of the Qur'an was maintained according to the will of God. The Qur'an was memorized and recited in this order. However, during the Prophet's time, this holy book was recited, but the emphasis was on memorization. Later, the demands of the time drew the attention of the Rashidun Caliphs to the regular compilation of the Holy Qur'an and this last book of the Allah's Words is preserved till the Day of Judgment.

How many verses in the Quran or How many ayat in quran?

How many surahs are in the Quran?

If you are looking for the question "How many chapters in the Quran". The chapter refers to each separate surah of Quran. There are a total of 114 suras in the Holy Quran, The biggest surah of the Qur'an is Surah Al-Baqarah and the smallest is Surah Al-Kawthar, The Surahs in the Qur'an are divided into Makki مکی  and Madani مدنی  in terms of descent. In 114 Surahs in the Qur'an, 65 are Makki and 18 are Madani. Among the surahs, there are 35 surahs which are said to have been revealed twice, once in Makkah and once in Madinah such as Surah Ar-Rahman, Surah Zalzal etc.

1. Eloquence:   The Qur'an is a miracle in terms of eloquence. Because at the time of the revelation of the Quran there were many poets and writers in Arabia whose poetry proved meaningless in the face of the words of the verses of the Holy Qur'an and they were forced to say that this is not really the word of any human being.
2. Told about Unseen:   The reason why the Quran is a miracle is that it tells us the the unseen. Like the incident of the corpse of Pharaoh (Pirhon), which Allah Almighty has made a sign. Despite being in the water for so many years, it is still safe today. Because the Quran had told fourteen centuries ago to be safe as a sign.
3.Mentioned previous prophets::   One of the miracles of the Quran is that it mentions the previous prophets. How they preached the true religion and what problems they faced as a result. But in spite of this, they did not stop preaching the Oneness of Allah Almighty.
4.Mentioned God's punishment on the disobedient:   The Quran is no less miraculous in that it confirms God punishment for the rebellious. And why did Allah Almighty arrest them in torment? Like the remembrance of Prophet Mosa(peace be upon him) and Pharaoh, the remembrance of Prophet Noah (peace be upon him) and his ummah and the command of Allah Almighty to build the ark. The people of Lot (A.S) mentioned and the reason why they were caught in the torment of Allah.
5.Universal book:   The Qur'an is also a miracle in terms of being a universal book. The first heavenly books were revealed for a particular nation and a particular time, but the Qur'an was revealed to carry the message of guidance for all mankind.
6.Comprehensive and complete book:   The Holy Quran has the honor of being a comprehensive and complete book in every respect. It guides all walks of life in society, economy, religion, politics, ethics and education and is free from all faults and one who adheres to the principles laid down by it never fails.
7.Free from contradictions:  The style of the Qur'an is not written but spoken. It sheds light on almost all topics. The same subject is stated in different places but the style of speech is different everywhere and Nowhere is there any contradiction in the stated facts. There is a beautiful connection in different suras and verses.
8.Scientifically miraculous  The Holy Quran is a scientific miracle. In which all the sciences are present. To date, millions of scholars have interpreted it, and not one of them has claimed that all the sciences mentioned by Quran are discovered fully. It is as if we say that there are still some secrets that need to be worked on.
9. Evidence and light  The Qur'an is a proof and the proof is so clear that it has been called the light of revelation. The Qur'an is a light by the light of which mankind will always reach the destination of success.
10. Unity of the human race: The former prophets were sent to their nation. After his demise, his ummah became a victim of narrow-mindedness and anarchy. In the end, Allah Almighty revealed the Holy Quran to bring all nations together on one platform and taught unity to all mankind.
11. The effect of the word on the heart: One aspect of the miracle of the Qur'an is the effect of the word which descends into the depths of human heart that removes the rust and all the dirt. It is the Holy Quran that has brought the Arabs out of ignorance and made them moral figures.
12 Protected from distortion: The greatest miracle of the Quran is that it is safe from distortion till today and will remain safe. It is preserved in the same language (Arabic) in which it was revealed and the responsibility for its protection has been taken by Allah Almighty Himself:
13 Practical book: The Qur'an is also a miracle in the sense that it provides comprehensive teachings and instructions on various aspects of life as well as urges adherence to these teachings. It not only teaches ethics but also its golden principles and this makes the righteous part of faith.