A Primer on Scientific Programming with Python

Author Unknown Published March 11, 2018
Tags
computer
Computers
Programming
technology
The aim of this book is to teach computer programming using examples from mathematics and the natural sciences. We have chosen to use the Python programming language because it combines remarkable power with very clean, simple, and compact syntax. Python is easy to learn and very well suited for an introduction to computer programming.
Python is also quite similar to Matlab and a good language for doing mathematical computing. It is easy to combine Python with compiled languages, like Fortran, C, and C++, which are widely used languages for scientific computations. A seamless integration of Python with Java is offered by a special version of Python called Jython.
The examples in this book integrate programming with applica- tions to mathematics, physics, biology, and finance. The reader is expected to have knowledge of basic one-variable calculus as taught in mathematics-intensive programs in high schools. It is certainly an advantage to take a university calculus course in parallel, preferably containing both classical and numerical aspects of calculus. Although not strictly required, a background in high school physics makes many of
the examples more meaningful. 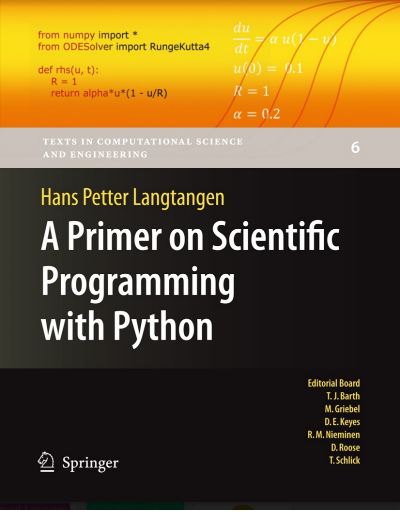