Author Unknown Published March 10, 2018
Tags
Computers
Programming
technology
Many professionals are increasingly embracing Debian GNU/Linux, whose goal to create a rich and flexible distribution that does not require too much maintenance fits their expectations. They generally appreciate its robustness and reliability, its automation of secondary tasks, as well as the coherence brought by the strict application of specifications and therefore the durability of achievements and skills.

At the same time, many influential actors in the computing industry have now come to understand the strategic interest of using an elaborate distribution that is not managed by a commercial entity. Some of their customers also understand — following the same logic — that a software platform that does not depend on agreements between suppliers reduces the constraints they will have after the purchase.

Finally, many beginners discover Debian through the Knoppix and Ubuntu projects, while others “look under the hood” because they want to avoid empiricism. Debian — which used to be low-profile — was first adopted by passionate users, who were often attracted by the spirit it embodies. They found a project with clear goals and visible achievements, whose developers focus on creating a good design before building — thereby rejecting the deadlines that often compromise the quality of so many other software projects. Debian is led by its very actors. In other words, Debian users join a project that fully benefits from the advantages of free software... so as to produce free software themselves.

The Debian Administrator's Handbook will guide you on your way to autonomy. It could only be written by authors who master both the technical aspects and the inner workings of the Debian project, and who know the needs of seasoned professionals as well as enthusiasts. Raphaël Hertzog and Roland Mas had the required qualities and managed to create and update this book. 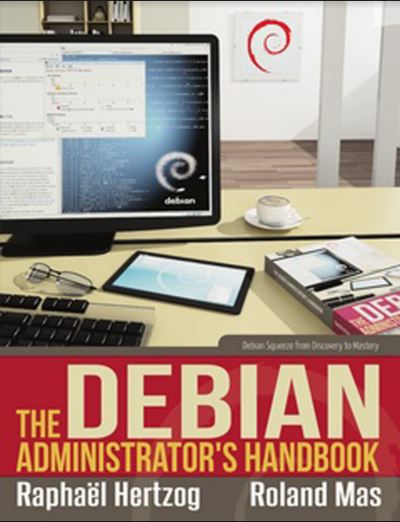