Author Unknown Published March 10, 2018
Tags
Computers
Programming
technology
My computing life began long ago in the Commodore/Atari days. No doubt inspired by Alan Alda’s television commercials at the time, I purchased my first machine, an Atari 600XL with a cassette drive for storage and 16KB of RAM—more than I thought I would ever need. Most of my time on that machine, I must admit, was spent playing cartridge-based games and transcribing pages and pages of machine code from the now-defunct magazine Antic to create even more games.

Eventually, my interest in computers increased, especially after seeing my first (and actually the first) Macintosh at the UCLA bookstore. The very in-your-face nature of the Mac’s operating system caused me to become an operating system maniac. To date, I have worked with a lot of different operating systems, including Mac OS up to and including OS X, every Windows version from 3.1 to XP, and even IBM’s much forgotten OS/2. Though tempted to join the Linux fray, I continued to steer away from it for a long time because I could not help but see it, as so many others do, as a system for never-seen-the-light-of-day-faced, late-night Dr. Pepper–drinking, Domino’s-pizza-eating compu-geeks. However, when I moved to Japan and was suddenly surrounded by machines loaded with Japanese versions of Windows, I encountered numerous problems, such as language constraints.

Since everything, including Help files, was written in Japanese, I ended up using only a fraction of the full potential of most software. Then there were those annoying Windows-type problems, such as the constant freezes and restarts and the gradual system slowdowns, which were eventually only
remedied by reinstalling the system. Getting the software I needed to do the things I wanted to do also took its toll on my wallet, and I began to rethink my initial resistance to Linux. With Linux’s multilingual support, system stability, and extensive and free software packages, there were plenty of
incentives for me to get over my preconceived notions about the typical Linux user.

After a few failed attempts at getting Linux to work on the oddball, Frankenstein-like collection of junk that was my computer, I finally succeeded with a CD-based Knoppix distribution, which worked well enough to hook me in a little further. I moved on to Mandrake (now known as Mandriva) next, since that was claimed to be the most newbie-friendly version, and then tried out SuSE as well, which I found to be rather quirky. Eventually, I tried out Red Hat Linux and stuck to that because it just didn’t give me any grief; and I, like most others, do not want any more grief than necessary. I started off with my three desktop machines at work and home set up as dual-boot systems running both Linux and Windows, but I gradually found myself using only Linux. Although I had expected to encounter numerous limitations in Linux that would force me to return to Windows often, I instead found that I had actually increased my productivity. Other than lack of native support for Windows streaming media, I was actually able to do more due to the extensive software base that was now installed on my machine. Without having to fork out money that I could ill afford to spend, I was able to manipulate my digital images, rip songs from CDs, create vector drawings, create PDF files, and do a variety of other things that I wasn’t able to do under Windows. It was only a matter of time before my dual-boot setups became full Linux-only setups. I ceased to be a Windows user.

Since those early Linux days, I have gone on to try out a number of other distributions including JAMD, Xandros, Damn Small Linux, and most recently Ubuntu. I am happy to report that things have continued to get easier and better, and those early frustrations I suffered trying to get things to work with this machine or that piece of hardware are becoming more and more a thing of the past. Best of all, with the advent of live CDs, which allow you to try Linux out before you actually install it, you don’t even have to take a leap of faith to get started. 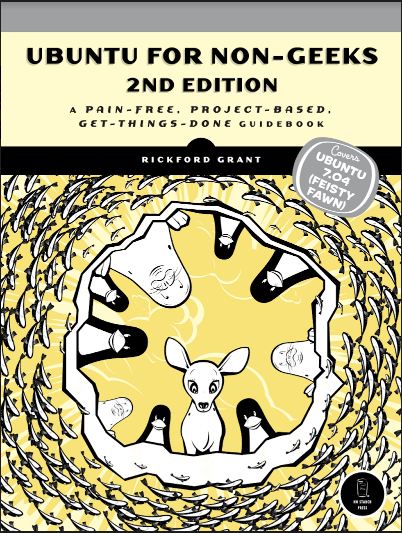