The Tipping Point is the biography of an idea, and the idea is very simple. It is that the best way to understand the emergence of fashion trends, the ebb and How of crime waves, or, for that matter, the transformation ot unknown books into bestsellers, or the rise of teenage smoking, or the phenomena of word of mouth, or any number of the other mysterious changes that mark everyday life is to think of them as epidemics. Ideas and products and messages and behaviors spread just like viruses do. 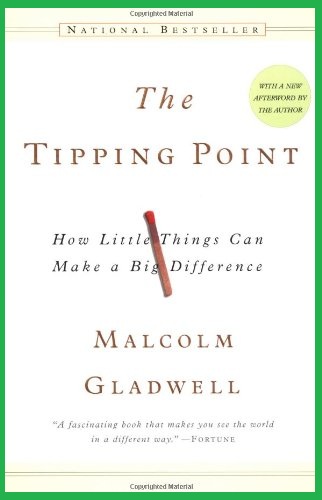 In this best-selling book, The Tipping Point, Malcolm Gladwell has popularized the concept of social epidemics, the social changes brought about by sudden changes in human behavior caused by products or ideas that disseminate and spread like infectious diseases and shape history. ‘‘If we understand the way in which social epidemics, such as crime waves and fashion fads, reach critical mass – what epidemiologists call the tipping point – we can shape history. The term ‘‘tipping point’’ refers to the moment of critical mass, the threshold, the boiling point. The right word, at the right time, in the right ‘‘socially promiscuous’’ ear can change the world, says Gladwell. ‘‘Look at the world around you. It may seem like an immovable, implacable place. It is not. With the slightest push – in just the right place – it can be tipped.’’ii This push, Gladwell argues, often comes from a few people that can spread sticky messages to others. In 1984, for instance, the push to reduce New York City crime came from one man, Bernard Goetz, when he shot at the teenagers who harassed him in the subway. From that time on, would-be criminals had to think twice before they harass citizens. As a result, crime declined significantly.