Optics of the Human Eye

Author khan books Published January 20, 2019
Tags
disease
diseases
eye
health
human eye
The purpose of this book is to describe the optical structure and optical properties of the human eye. It will be useful to those who have an interest in vision, such as optometrists,ophthalmologists, vision scientists, optical physicists, and students of visual optics. An understanding of the optics of the human eye is particularly important to designers of ophthalmic diagnostic equipment and visual optical systems such as telescopes.
Most animals have some sort of eye structure or sophisticated light sense. Like humans, some rely heavily on vision, including predatory birds and insects such as honeybees and dragonflies. However, many animals rely much more on other senses,particularly hearing and smell, than on vision.The visual sense is very complex and is able to process huge amounts of information very rapidly. How this is done is not fully understood; it requires greater knowledge of how the neural components of vision (retina,visual cortex, and other brain centres) process the retinal image. However, the first stage in this complex process is the formation of the retinal image. In this text, we investigate how the image is formed and discuss factors that affect its quality.
The majority of animal eyes can be divided into two groups: compound eyes (as possessed by most insects), and vertebrate eyes(such as the human eye). Compared with vertebrate eyes, there is considerable variation in the compound eyes. Compound eyes contain a large number of optical elements(ommatidia), each with its own aperture to the external world. Vertebrate eyes have a single aperture to the external world, which is used by all the detectors. A number of other animals have simple eyes, which can be described as less developed versions of the vertebrate eye. All eyes, of whatever type,involve compromises between the need for detection (sensitivity), particularly at low light levels, and spatial resolving capability in terms of the direction or form of an object.Although this book is about the optics of the human eye we do not wish to consider the optics in complete isolation from the neural components, as otherwise we cannot appreciate what influence changes in the retinal image will have on vision performance. As an example, altering the optics has considerable influence on resolution of objects for central vision but not for peripheral vision. This is because the retina's neural structure is fine enough at its centre, but not in the periphery,for large changes in optical quality to be of importance. Thus, the neural components of the visual system, particularly the retinal detector, rate some mention in the book. The neural structures of the retina themselves produce optical effects. As an example, the photo receptors exhibit wave guide properties that make light arriving from some directions more efficient at stimulating vision than light arriving from other directions. Another example is that the regular arrangement of the nerve fibre-layers produces polarization effects.While image formation in the eye is similar to that in man-made optical systems such as cameras and must obey the conventional optical laws. 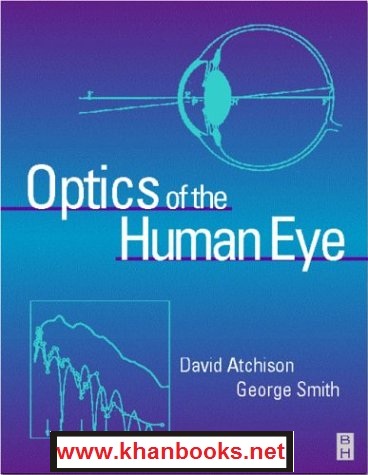 There are some interesting differences because of the eye's biological basis. Perhaps the greatest difference is that,as a living organ, the eye responds to its environment, often in an attempt to give the best image under different circumstances.Also, it grows, ages and suffers disease.Unlike most man-made optical systems, the eye is not rotationally symmetrical about a single axis, and different axes must be used to define image formation.There are many interesting and important optical effects associated with ocular diseases such as keratoconus (conical cornea) and cataract. Furthermore, the balance between optical and neural contributions to overall vision performance changes with diseases of the retina and beyond. Although there are some passing references to cataract, we have concentrated on the healthy human eye. We give some prominence to age-related changes in the optics of the eye throughout the book,and devote Chapter 20 to this topic.
To make the book easy to read it is divided into a number of short chapters, with each chapter dedicated to a single theme. The most commonly useful topics are at the beginning,and topics with narrower appeal (such as ocular aberrations) are placed towards the end. Section 1 covers the basic optical structure of the human eye, including there fracting components, the pupil, axes and simple models of the eye. Section 2 is about image formation and refraction of the eye.This includes the refractive errors of the eye,their measurement and correction, and paraxial treatments of focused and defocused image sizes and positions. Section 3 deals with the interactions between light and the eye, considering transmission, reflection and scatter in the media of the eye and at the fundus. Section 4 deals with aberrations and retinal image quality. As well as considering these for real eyes, it covers the modelling of eyes and the performance of a range of schematic eyes of different levels of sophistication. Section 5 considers the topics  of depth-of-field and age-related changes in the optics of the eye. While depth-of-field effects could possibly have been placed earlier in the book, understanding them well requires some knowledge about aberration and diffraction.
DOWNLOAD