The Essence of Kung-Fu Taiki-Ken By Kenichi Sawai 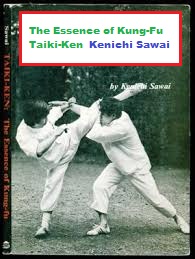 Chinese hand-to-hand fighting called chuan-fa in Chinese and kempo in Japanese is very ancient. There are some people who argue that it originated in the religious disciplines of the Buddhist patriarch Bodhidharma, who traveled to the Chinese temple called the Shao-lin-ssu, in the sixth century. Although this is no more than an unsubstantiated legend, it seems certain that some kind of Chinese hand-to-hand combat was beginning to develop in that early period. During the centuries that followed, these combat techniques were the subject of study and refinement. They have been passed down in various traditions to the present time. The most famous of the schools of the Chinese martial arts are the Shao-lin-ch'ilan, Ta-chi-ch'uan, Hsing-i-ch'ilan, and Pa-kua-ch'ilan. The Taiki-ken discussed in this book evolved from Hsing i Chuan.
During World War II, the author became the first non-Chinese ever to study with the great Chinese martial-arts specialist Wang Hsiang-ch'i. After he returned to Japan, the author received Wang's per-mission to set up a martial-arts school of his own. The basic principle of Taiki-ken is to leap to-ward an attacking opponent and simultaneously to defend yourself and down him with a powerful attack. Taiki-ken lacks the mild qualities of sports, since it assumes that, if the person does not down his opponent with an effective attack, he will be quickly downed himself. But rashness is out of place even in the necessarily speedy actions of Taiki-ken. The ability to make one attack spell defeat for the opponent only develops when the individual is able to manifest the powers he derives from mastering the spiritual and technical aspects that Chinese martial-arts specialists have perfected over the centuries.
DOWNLOAD