Breaking the Vicious Cycle presents information on the relationship between food and  disorders  such as Crohn's disease, diverticulitis, and celiac disease, and provide a collection of recipes following the principles of the Specific Carbohydrate Diet.

Some people are do well with fiber in their diet, but other do poorly even with normal sources of roughage. Breaking the Vicious Cycle theory is that it is not each food that cause intestinal problems, but the byproducts consumption of specific foods. The author of Breaking the Vicious Cycle also believes in holistic goals of establishing a healthy balance of intestinal flora without retreat to drugs and medicines.By following the concepts of the author has made a difference in the lives of huge number of patients with gastrointestinal disorders.

When carbohydrates are not digested, they are not absorbed immediately. They stay in the intestinal tract, thus encouraging microbes to multiply by providing food for them. This can cause to the formation of acids and toxins which can injure the small intestine.

Once bacteria multiply within the small intestine, they can demage the enzymes on the intestinal cell surface, stopping carbohydrate digestion and absorption. At this point, generation of extra mucus may be triggered as the intestinal tract attempts to "lubricate" itself against the impatient caused by the toxins, acids, and the presence of limited digested and unabsorbed carbohydrates.

Breaking the Vicious Cycle diet is based on the principle that is specially choose for carbohydrates, need minimal digestion, are well absorbed leaving virtually nothing for intestinal microbes to feed on. As the microbes reduces due to lack of food, their harmful by-products also become less. No longer needing protection, the mucus producing cells block producing excessive mucus and carbohydrate digestion is enhanced. The Specific Carbohydrate Diet heal malabsorption (difficulty in absorption of nutrients), allowing nutrients to go to the bloodstream and be made available to the cells of the body, As a result of that strengthening the immune system's ability to fight. More weakness is prevented, weight can come back to normal, and ultimately there is a return to health. 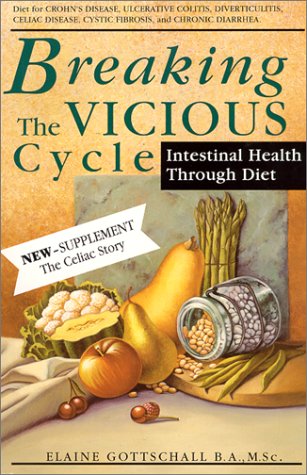