First of all, there are three main characters in this novel. A hero, a heroine and a villain. You may find this story cliche / stereotype. Because, to put it simply, there is an ISI officer who has to catch a very dangerous terrorist and reveal all his secrets before killing him so that his terrorist business will stop after his death. The ISI officer needs the help of a girl to get the job done very quickly. He trains the girl at the behest of his boss and then he send her to the terrorist. Why is a girl needed now? In fact, the villain must have fallen in love with the same girl. The name of the hero is Aas Alam, the name of the heroine is Neelam Abrar and the name of the villain is Minhaj.

Neelam Abrar: She is a incredibly beautiful and very emotional girl of 18 years. She does not have any love for her homeland. Who doesn't even like to stand on the national anthem. She loves noble stones especially Emerald. There is a philosophy to her life. She wants to make a person part of her life who is as hard as a stone like emerald stone.  And Neelam is currently in one sided love with Aas and this love happened to her when Aas was living in a separate portion of Neelam's house as a paying guest named Tiger. As you know, the spy corps with a different identity is living where they work. A house made of playing cards, which is probably ruined by a gust of wind.

I didn't like Neelam's character at all. Because she has gone so far in her one-sided love that she has trampled on her self-esteem many times. Even if a girl has fallen in love with someone, then she should not beg for love  and should about the pride and dignity as well. This is what I got to learn from this character. By the way, such a detailed lesson has been taught to us in Namal novel by both Haneen and Abdar from their own endeavors. How many times Neelam has been humiliated because of her one sided love. The second Neelam also agreed to the mission to capture Minhaj because she would have more time to spend with Aas. In this way, Neelam became a spy not for the love of homeland but for the love of Aas.

Aas Alam: 28 or 29 year old handsome man (spy) who loves his homeland very much. He loves his homeland more than anything in the world. He wants to destroy Minhaj because Minhaj had killed his parents but this man is a big threat to the country of Aas. Neelam was obviously being given very hard training. One of the special things about Aas is that he is not the kind of man who takes advantage of women's. He never give response and encourage to Neelem as given by her due to love in her heart. According to him, the pride and dignity of her caste is the most important thing for a woman, so that the pride and dignity of her caste does not need to compromised for her beloved. That is why he has always tried to persuade Neelam not to shake her head with me. and told her that I am not like the ordinary loafers boys who run away even if the girl gives the slightest hint. Aas also has two philosophies and they are that "an officer should be so strong that he cannot cry for anything except love of country and "you can't be brave unless you see your dearest thing perish". These two lines in the words of exact writer and Aas said this to Neelam.

Minhaj Uz Zahak: This man will be between 30 and 35 years of age. He was a resident of Saudi Arabia. His family included parents and a sister. And he loved his sister Kainat very much. But some people had killed his family who were directly or indirectly related to Pakistan. That is why he has become the enemy of whole Pakistan. Minhaj has a hand in every evil deeds, from bombings to drug trafficking among the youth. This guy has no interest in girls. But I don't know how he fell in love with Neelam in his second meeting. I liked the character of this man, both good and bad. Minhaj-ul-Azhaq has been portrayed as a well-dressed and handsome man whose heart has turned black and who keeps his enemies in trouble all the time. There are many painful stories behind the criminal life of many criminals. But that doesn't mean that those painful stories will cover up their every evil deed. Neelam was also told not to create a soft corner in her heart for those criminals after knowing those painful stories. And don't let Minhaj cross its boundaries. Therefore, there is no danger that Neelam will have to marry Minhaj in order to trap Minhaj. Secondly, it is not right to punish innocent people of the whole country for the evil deeds of a single person or a group.  As Minhaj was to carry out an explosion in Sehwan Sharif, information about Sehwan Sharif was given.

Maturity in the writing style of this novel is good. No other kind of lousy love was written. All that sounds pretty crap to me, and the third writer has provided two or three paragraphs on the culture of Pakistan. Then the historical culture of Hala, a city located in Sindh and more or less about Shah Abdul Latif Bhattai was mentioned in one or two paragraphs. Then there was a historical place beyond Karachi, not much was said about it. Then there are my favorite action sequences. The latest episode has some information about human dreaming Like personal & universal mind, then name five senses besides six senses that man can feel them too. Then some of the different stages of sleep in which dreams are seen. I find all these things very useful. Don't say that there is a glimpse of Halam because Halam mentions dreaming with open eyes in two ways. One is like Allama Iqbal dreamed of becoming Pakistan (Fatih The Visionary) and the other is the dream that belongs to ultimately supernatural fantasy.

Writer writes: "Every story is a story of love. The only difference is that love is not always with man. Love can be with anyone like Neelam's love for emerald, Aas's love for Pakistan, Minhaj's love for the universe. Neelam was ruined by her love, Aas is strong and Minhaj is cruel. If you read this novel, you may like or dislike it, but I love it. 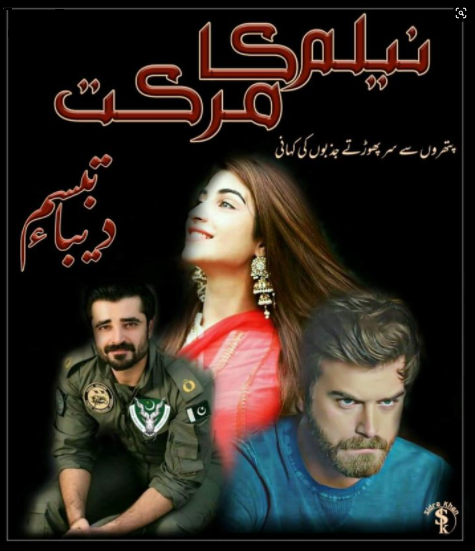