Author khan books Published January 22, 2022
Tags
urdu novel
In this post we have discussed Famous Urdu Novels |  اردو کے مشہور ناول. It should be clear at the outset that the ten best and most popular Urdu novels have been judged by their quality, craft, popularity and time. , Compiled under study and appropriateness. It does not include so-called popular fiction or digest or literature, that is appreciated by women who watch dramas, but be aware that there is a list that everyone can agree on, if you do not agree with this list. You have complete freedom to make your own list of the best Urdu novels. 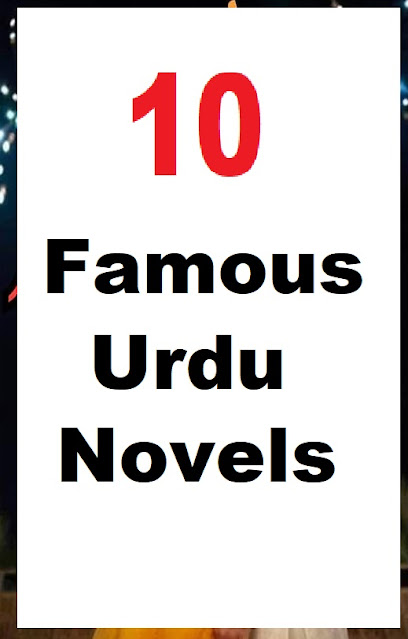 There was a time when critics were disappointed with Urdu novels. Many have even said that great novels are a thing of the past, there are not even a dozen novels in Urdu that can be called good novels, but novelist and critic Aziz Ahmed does not agree with that. In one of his articles, he has said that those who have not studied Urdu literature or have not read any novel in depth are the ones who say such things. Another writer Shehzad Manzar says that many good novels were written after independence and He says the best novels came out in the 1970's. Perhaps this is because in agricultural societies poetry prevailed over prose and the novel is a product of the industrial age, but in the last fifteen years good Urdu novels have been regularly published. If any other contemporary novel could be included in this list of novels, it could be Shams-ur-Rehman Farooqi's novel "Kai Chand The Sar Asmaan". It shows the culture and character of the subcontinent. The whole of Ghalib in the novel is worth reading.

Perhaps the time has come for it to get the status of a novel. We will talk about a masterpiece novel, written by Pandit Ratan Nath Sarshar, except for the early Urdu novels like Maulvi Nazir Ahmad's Marat-ul-Arus (1869). (1878) came to light and the general objection is that it lacks a real plot and is a very heavy novel. But the same is true of some of the world's greatest novels, most notably War and Peace and The Brothers Kramuzov. It describes the Lucknow civilization in pure Urdu. There is also a humorous character of Khoji, who can be considered as one of the first comic characters in Urdu literature.

Amrao Jan Ada Famous Urdu Novel was witten in 1899, this novel was in a sense a symbol of the rise of Urdu novels. Critics are still divided over whether or not Amrao was a real character, but the novel demonstrates Mirza Hadi Raswa's great mastery of fiction. Apparently it is a biography of a prostitute, but it can be considered a novel reflecting the culture and society of Lucknow in the second half of the nineteenth century.

Of all the novels by Munshi Prem Chand, Gaudan (1936) has the status of the best work. It depicts the plight of Indian farmers for two lives. Prem Chand depicts the oppression of peasants. Prem Chand first started writing in Urdu, but gradually he moved to Hindi, while Gaudan was first written in Devanagari script and It was written in Urdu by Iqbal Bahadur Verma Sahir, but it can still be called Urdu novel and it is also one of the best Urdu novels.

It is also considered as the greatest novel in Urdu language. Well-known novelist Qarat-ul-Ain Haider's creation of the Aag Ka Darya (1957) has given rise to many controversies which have not ended even today. One of the objections is that it was inspired by the Virginia Woolf autobiography . The novel covers the 2,500-year history of the subcontinent and if you try to grasp it, it is as if history grabs you.

This is the novel of Abdullah Hussain, which he took to the heights of fame overnight. Although Qarat al-Ain Siddiqui had accused Abdullah Hussein of plagiarism and even referred to page number that included the style and paragraph of the novel "Aag Ka Darya", One of the most important Urdu novels. It depicts a village between Delhi and Punjab, inhabited by Hindus, Muslims and Sikhs.

Aangan novel is written in 1962, the novel is considered a masterpiece. Unlike other fictions, it is not read as history. This style is the reason for Khadija's popularity and greatness.

One of the most popular novels in Urdu, Khuda Ki Basti has been written by Shaukat Siddiqui and so far 50 editions have been published and it has been translated in 20 languages. Khuda Ki Basti is the story of a society that struggles for survival despite its economic and political ups and downs. Shaukat Siddiqui has boldly presented the inner truths of the civil society formed in post-partition Pakistan which is the mouthpiece of semi-capitalist and semi-feudal society in his novel "Khuda Ki Basti". Lust and deception were being used as a shield against religion and democracy. Such a deception has tried its best to show the mirror to the society. In his novel, Shaukat Siddiqui has definitely portrayed the society that came into being on human motives on the lines of fiction, but he has analyzed the social and human psychology in such a technical way that it has brought the story very close to real life. All his characters seem to succeed in making their character natural with the adaptation of the environment with truths. The novelist has presented the human instincts through their psychological process. The main characters of this novel are Raja and Nosha who are 14-15 years old. This novel is a picture of a society that has reached the point of selfishness. Where human values ​​have died. An apathetic society silently watched the sexual exploitation of Sultana and her mother. Shaukat Siddiqui has expanded the tradition of social realism in his novel which was built by Prem Chand. His class consciousness and philanthropy show the way beyond Prem Chand in the novel.

Muhammad Khalid Akhtar was a prominent comedian and his novel has also been nominated by Faiz Ahmed Faiz. There is a hint of humor in everything described in it. Written in the background of Chakiwara area of ​​Lyari, the characters of Chakiwara come alive in this creation.

In this novel written in the 1980s, Banu Qadsiya has presented a sociological theory. It says that every form of corruption causes some mental illness. Our society is rife with corruption and in it the author explains how corrupt characters suffer.
This is a list of 10 Famous Urdu Novels |  اردو کے مشہور ناول for novels lovers. If you want us to add any novel to this list let us know.