Capitalism not only gives the individual a sense of superiority but also tries to dominate others to such an extent to takes away their emotions, desires and abilities and enslaves them and then imposes will on them. I think it creates three kinds of problems in the society. The first type is when people lose their ability to think, understand and move on forever and are forced to live a meaningless life. The second type is those in which people rebel against society, rely on their art and carry it out on a priority basis, but this situation is rarely seen in capitalist society. The third type is that in which ordinary people are further crushed in the mill of unemployment and poverty on the basis of social segregation. Wherever every member of the society enters the world of embarrassment, the door of the existing social depression also opens.

The above scenario is reflected in this Khuda Ki Basti Novel . When a common man is deprived of the basic necessities of life, he becomes involved in such criminal activities. Due to the unequal distribution of capital, he is forced to commit theft, robbery and other such heinous acts due to non-fulfillment of his basic needs.
Shaukat Siddiqui discusses social issues in this Khuda Ki Basti Novel in both ways. he reflects the society in a capitalist context, he also tries to explain the social evil from a psychological point of view. Here is an explanation of his writings from a psychological point of view. While society determines its effects on each individual, the environment of a home also establishes its effects on the individual.
When not paying attention to a single person in the house, then this inattention creates such a vacuum in him that when the same person grows up, he creates such a mess in the society so that he can become the center of attention of the people. ۔ For this, he chooses the path of social evil so that people are attracted to it. While in our case the individual is not considered psychologically in such a situation but on the contrary he is considered a real culprit, and then the same person gets upset at such reaction of the society and gets involved in further criminal activities. Yes, and this situation of the individual leads to a great deal of social chaos and disorder.
As in the novel Raja, Nosha and Shami are the characters of the society whose innocence is first used by the society for its nefarious purposes and then added to the list of criminals of the society and this is the psychology. It forces them to become even bigger criminals. In Khuda Ki Basti Novel, while the real face of our society has been well exposed, the aspect of society has also been brought to the fore that if an innocent person tries to do something in good faith, then the society The vested interests who occupy the society with the help of capitalism, cleverly surround these ordinary innocent people for their ugly purposes and play with their innocence.
The three friends tried many times to do good and profitable work but each time the vested interests of the society would dominate so much that they would be forced and helpless and then use them for their nefarious purposes. Just as Niaz first incites Nosha to steal then pushes both Shah Ji, Raja and Nosha into such heinous crimes at a young age, which is just as frightening to imagine.
Some of the characters in the novel portray married life as a solution to social problems. In this regard, they say that there is no world beyond the stomach for people suffering from poverty. May some luxuries be possible in their lives. While marriage has a purpose in procreation, it is also a reference to human aesthetic satisfaction. In this regard, the novel has been made aware of both the things that man should spread his legs by looking at his chador, meaning that the breed should not exceed the income of the individual so that better training of the current generation is possible, then their life will be a health. Mand will be able to exist, at the same time he will be able to maintain peace of mind in his social life on a priority basis.
In this wonderful Khuda Ki Basti Novel, the author also tries to explain the story of love from many angles. On the one hand, Nosha's mother, who loves her husband immensely, after her death, the situation took such a turn that in which love has already left her somewhere, there is also a need to spend her time in the cloak of love.
Anu's mother thought that Niaz is a man with a lot of money, he is starving anyway, what's wrong with me marrying him. In marrying him, on the one hand, there will be prosperity in the house and on the other hand, there will be a new love affair. In order to marry Sultana, Niaz considered it necessary to marry his mother first.
He marries Sultana's mother thinking that he will kill her by injecting her with poison, and later he will marry Sultana, so he did so, while on the other hand Sultana who loves Salman She could not get it either, because neither Sultana nor Salman had money, because they were both poor so their love was only to the extent of wanting each other.

Sometimes love, for its own sake, causes the lovers to commit crimes which are very horrible. Where love makes a person human, at the same time highlights the feelings of others. If capitalism jumps between love, then it robs both love and the sweetness of love. Niaz attacks the love of others for the fulfillment of his sexual desire by the force of capital, and succeeds in his dangerous intention. In this novel, Niaz appears to be a representative character of capitalism.
Khuda Ki Basti Novel By Shaukat Siddiqui Pdf Free Download 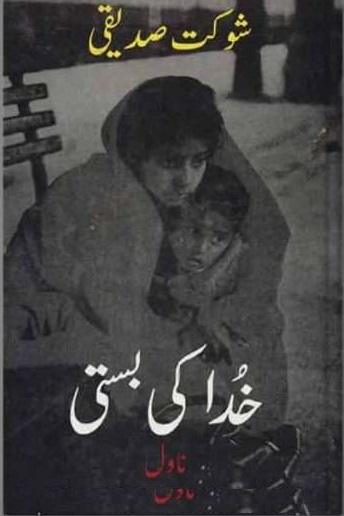