Author khan books Published November 07, 2022
Tags
al quran
al quran pdf
arabic islamic
download quran
holy quran pdf
Quran Para 8 pdf download free in HD colored print. You can download this pdf but you cannot make any sort of printing because the pdf file is locked. So this is the best 16-line Quran Pak colored with nice blue borders. The image shown below is of low quality but the original pdf file is of high quality which you can download from the below link.

The Quran Para 8 begins with the remainder of Surah al-An'am and continues the same subject on which the seventh para is completed. These verses were revealed when the polytheists of Makkah and the disbelievers of Arabia started asking for various signs from Prophet Muhammad (peace be upon him). Sometimes they say that angels should descend upon us, sometimes they say that if you are true, we want to see our Lord with our own eyes, and sometimes they say that resurrect our ancestors who have passed away from this world. God informed the prophet Muhammad about the nature of the disbelievers that their asking for signs is not based on righteousness, but they are only making such demands to escape from the truth. It is said that if We had sent angels down upon them and the dead would have spoken to them and brought everything before them. Even then, they were not believers except as Allah wills.
Further, it is said that most of the people who live on the earth are misguided, if you start following the majority of the people who live on the earth, they will lead you astray from the path of God. They follow only guesses and shoot arrows of guesswork. This verse is wrongly used by some people against democracy.
In Quran Para 8, it is said that it is not right to eat anything in which a name other than Allah is mentioned at the time of slaughter. It is said that Allah made every animal with nails haram for the Jews because of their rebellion and He also forbade the fat on the backs of cows and goats for them, but the reason for the rebellion of the Jews was this. That they started selling fat and eating it.
After that in Quran Para 8, Allah severely condemned the killing of children and said that those are the losers who killed their children with foolishness and declared forbidden the sustenance permitted by Allah by their own will. Allah has also mentioned the four major types of sustenance that are forbidden to humans: the first forbidden is carrion, the second is flowing blood, the third is the flesh of pigs and the fourth is the sacrifice of the name of other than Allah.
In para 8, Allah has also rejected the wrong excuse of the polytheists that they will say about themselves and their forefathers, if Allah had willed, we and our progeny would never have committed shirk. It is said that this and the people before them also continued to create lies in the same way.
In para 8th at the end of Surah Al-An'am, Allah has ordered His Messenger to announce that my Lord has shown me the straight path, i.e. the religion of Abraham, who belonged to Allah alone and was not of the polytheists. (O Prophet, say) my prayers, my sacrifices, my living, and my dying are all for Allah, the Lord of the Worlds, with whom there is no partner, and I have been commanded to Him, and I am the first to obey. It is also said that no one will bear the burden of anyone's (sin).
In Quran Para 8, after Surah Al-An'am is Surah Al-A'raf, at the beginning of which it is said: "O Muhammad, peace be upon him, this book that has been revealed to you should not make you sad, but it has been revealed to warn people." And this is an admonition for the believers. You follow this book and don't follow others. After that, it is mentioned about the weight on the Day of Resurrection that the weight on the Day of Resurrection will be with truth and justice, so whoever has a heavyweight for the right deeds will be successful and whoever has a lightweight of right deeds, these are the people who rejected our verses. 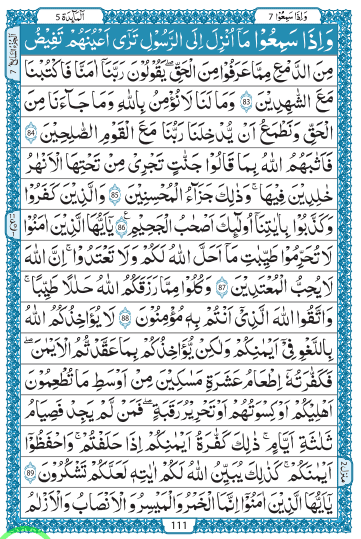