Surah Yaseen (Commonly known as Yaseen) is one of the 36th surah of Quran and is located in the 22rd and 23rd para of the Holy Qur'an, It begins with the syllables "Ya" and "Seen" and is known by the same name. And according to traditions, it is considered among the best surahs. This surah is even nicknamed "Qalb al-Qur'an", which mean Heart of the Qur'an. Among the principles of religion, monotheism, prophethood, the resurrection of the dead, and the speaking of body parts have also been mentioned in Surah Yaseen. In the same way, the story of the Ashab e Qarya and Momin al Yaseen has also been narrated.

Many virtues of reciting Sura Yaseen have been mentioned in the hadiths, as narrated from Imam Sadiq that whoever recites it before going to bed or before sunset will be safe for the whole day and will get more sustenance, and whoever recites it during the night before going to sleep, a thousand angels will be sent by Allah to protect you from the devil and every calamity.

This Surah is called "Yasin" because it begins with the letters Muqta'ah [Ya, Seen]. Surah Yasin is also called Surah Habib Najjar; Because this incident is mentioned in verses from 13 to 30. It removes evil from those who recite it and brings them the good of this world and the hereafter. According to traditions, Sura Yaseen is one of the most noble surahs of the Qur'an, which has received the title of "Heart of the Qur'an".

Order and place of descent

Surah Yaseen is one of the Makki surahs and is the 41st surah revealed to the Holy Prophet in order of revelation, while in the current Mushaf it is the 36th surah, which is located in the 22nd and 23rd para.

Number of verses and other features

Surah Yas has 83 verses, 733 words and 3086 letters. And in terms of length, this surah is included in the long surahs and is equal to one quarter of one para of the Qur'an. Similarly, it is one of the Surahs that begin with the Muqatta'at.

In this surah, there is a reference to the principles of religion like monotheism, prophethood and resurrection. The early verses describe prophethood and its philosophy and the reaction of people to the call of the prophets. After that, there are some verses about Tawheed in which some signs of the oneness of Allah have been described. After that, the resurrection of the dead to separate the pious from the criminals has been described in order to be punished them. It has been said that on that day the organs of man will begin to speak. At the end of the surah, the summary  of the three principles is stated.

The story of Ashab e Qarya and the Momin Al-Yasin

From the 13-32 verses Surah Yaseen, the incident of three messengers who entered a city to invite People toward Allah; But the people there did not accept their invitation. In the sources, it has been said about these three messengers that they were sent by Allah or were sent by Hazrat Isa. Among them, a person who is called Mu'min Al-Yis in the traditions, he believed in these messengers and invited people to obey the words of these messengers; But the people of the city did not listen to him and killed him, and then those people were tormented. The name of this person is not mentioned in the Quran; But in the books of hadiths and tafsir, his name is mentioned and he and his faith have been praised. His tomb is in Turkey.

Regarding the virtue of reciting Surah Yasin, it has been narrated from the Holy Prophet that whoever recites Surah Yaseen is equal to reciting the Qur'an ten times and whoever recites Sura Yasin for the will of Allah, Allah Almighty will forgive and give him a reward equivalent to reciting 12 times Qur'an and if recites it on a patient who is close to death then 10 angels will come to the patient and  will ask for forgiveness of the patient. and will stay there during the removal of the soul.Angles will participate in the funeral and do prayers and will also be present at the time of burial.

Jabir Jafi narrates from Imam Baqir (a.s.) that whoever recites Surah Yaseen once in his lifetime, Allah will reward that person with two thousand good deeds in comparison to every number of the creatures of this world and that which is in the heavens. And the same amount of sins will be forgiven, and he will not be afflicted with penury, loss, debt, and family disorder, will not see misfortune and insanity, will not suffer from leprosy, obsessions, and other diseases, and Allah Almighty will make the person safe from the severity of death and will ease the difficulties and Allah will take the soul of that person itself. And will be considered among those whose life facilities have been taken care of by Allah and guaranteed the prosperity at the time of death and guaranteed the prosperity in the Hereafter.  Allah also says to the angels of the earth and the sky: I am pleased with this person; So seek forgiveness for that.

It is narrated from Imam Sadiq (a.s.) that if you want to make your heart and mind strong, on the 9th of Sha'ban, write Surah Yaseen with roses and saffron and drink it.

Surah yaseen full is provided below. 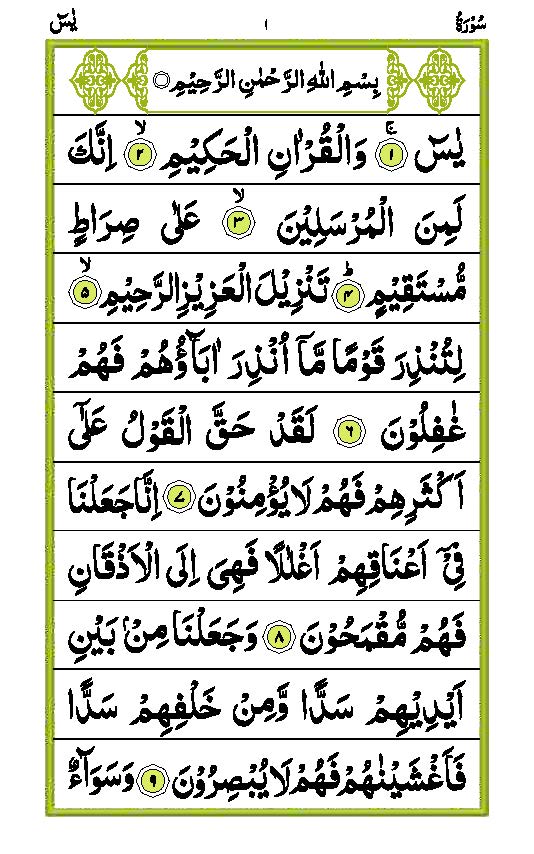 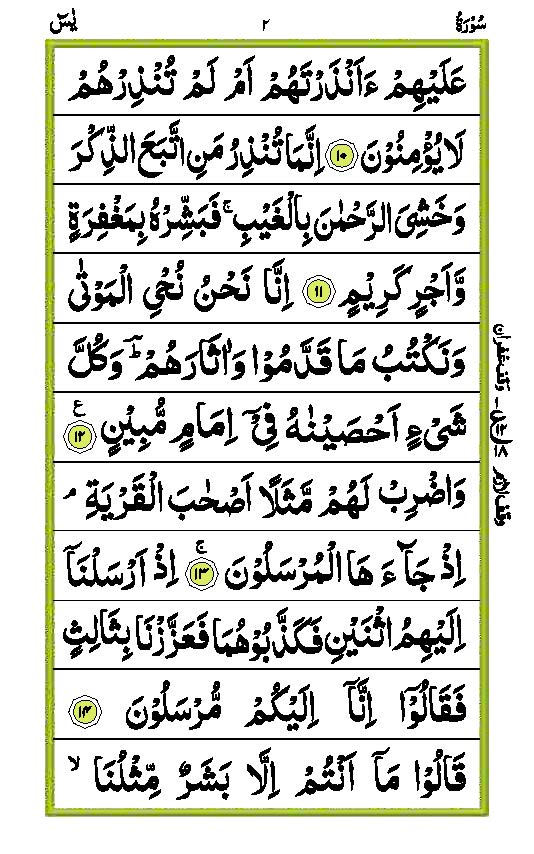 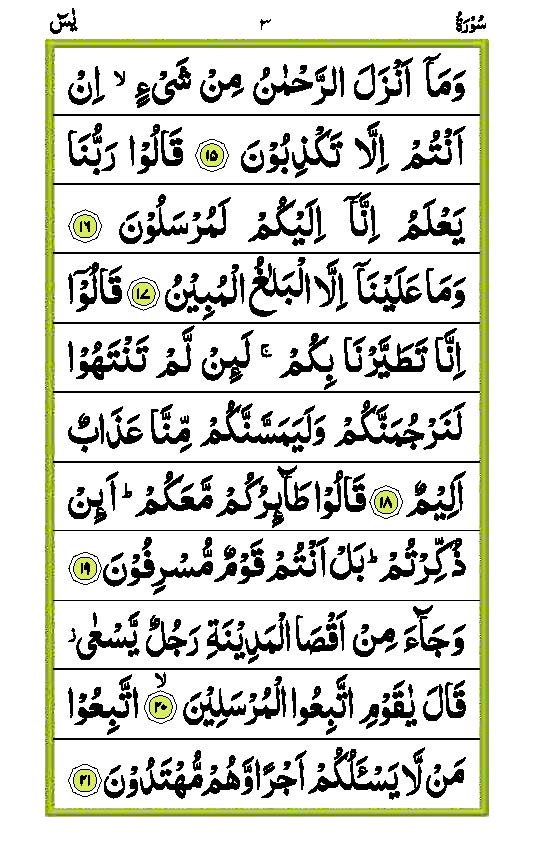 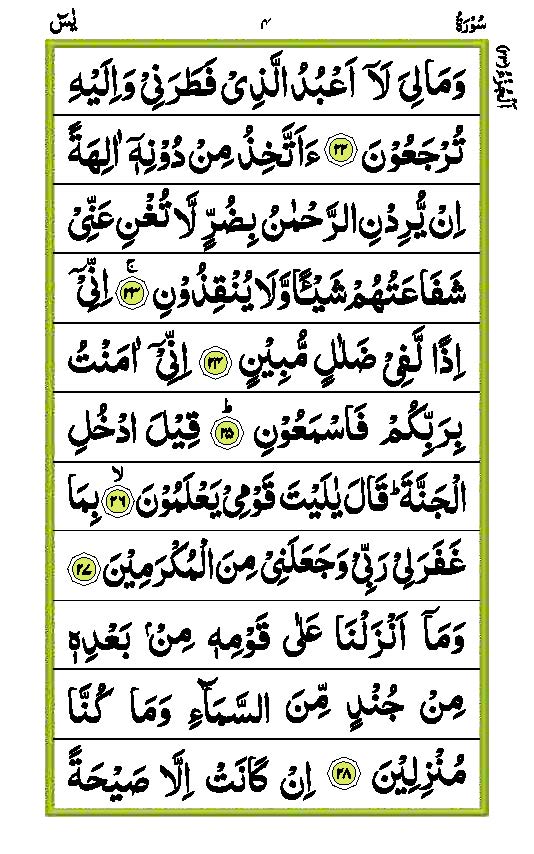 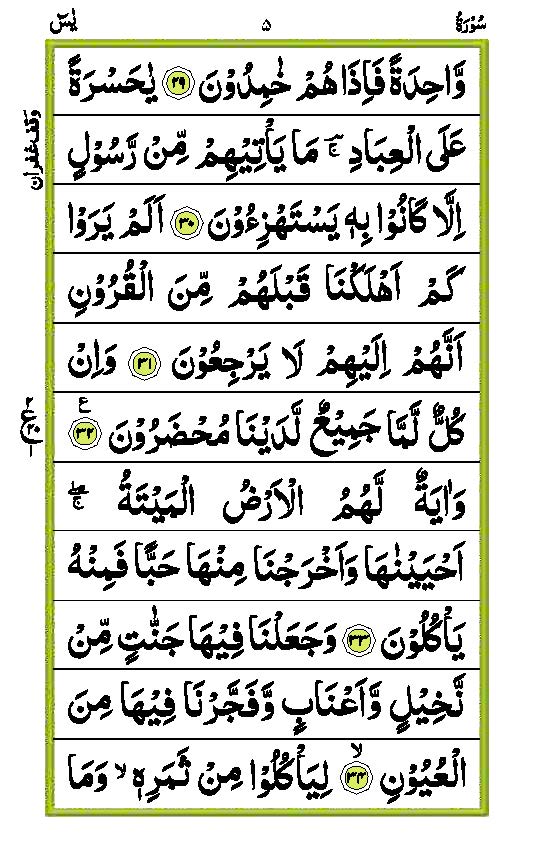 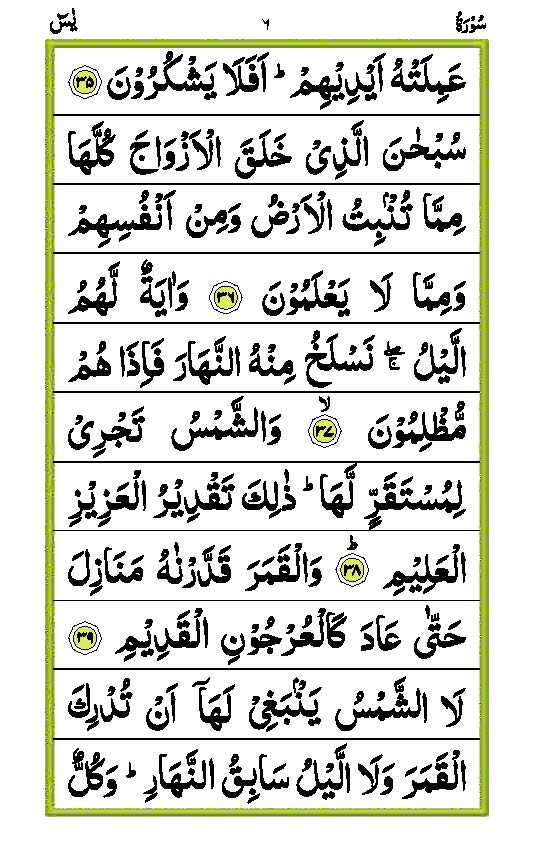 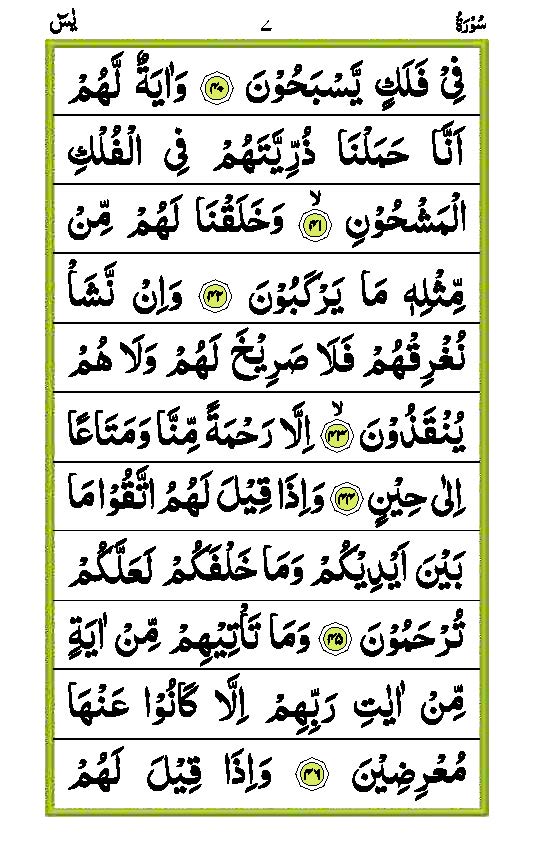 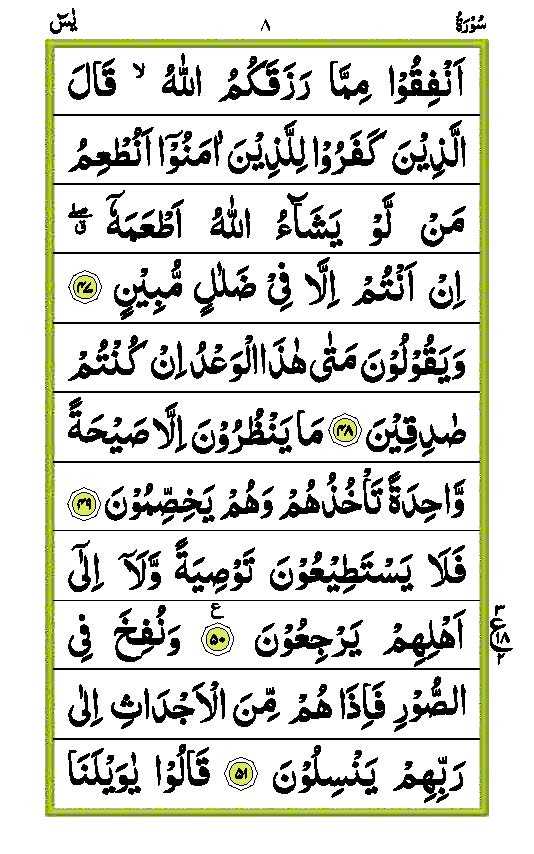 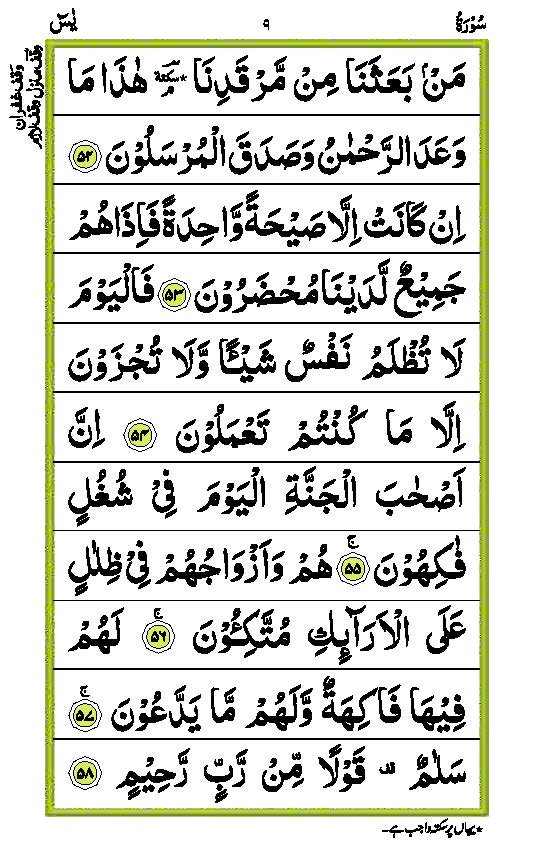 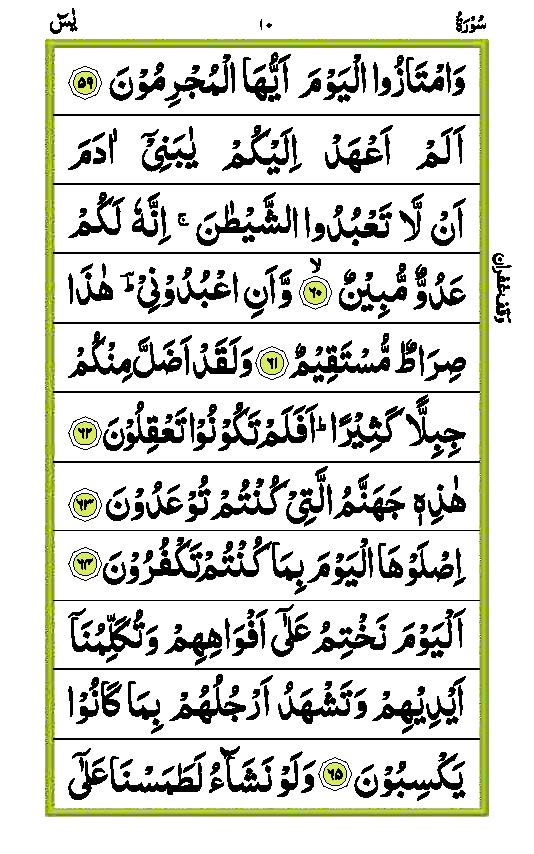 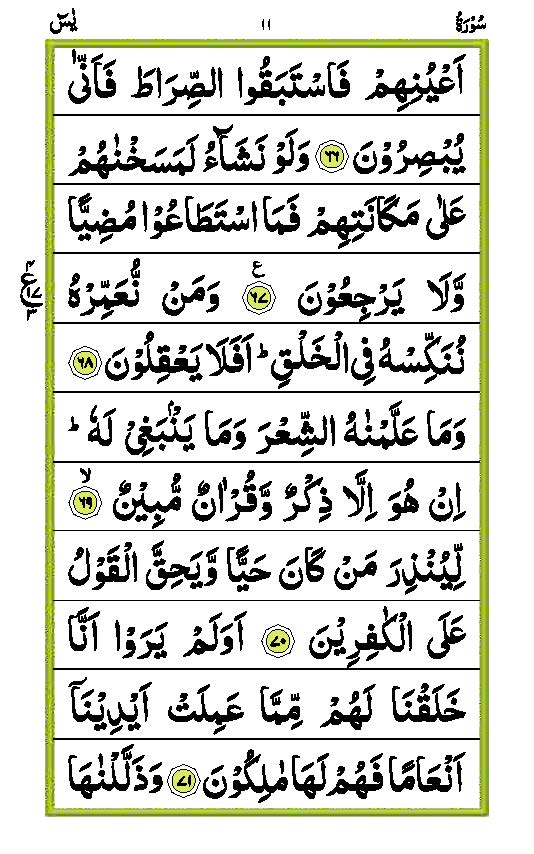 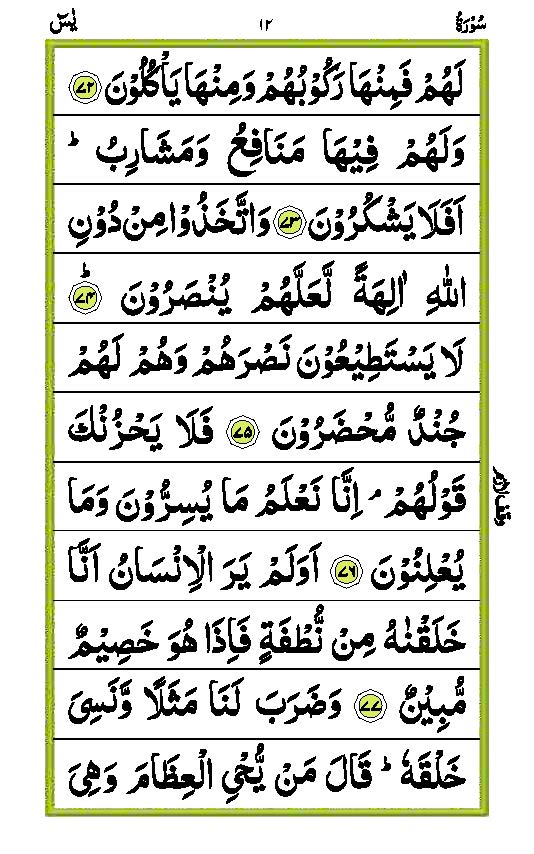 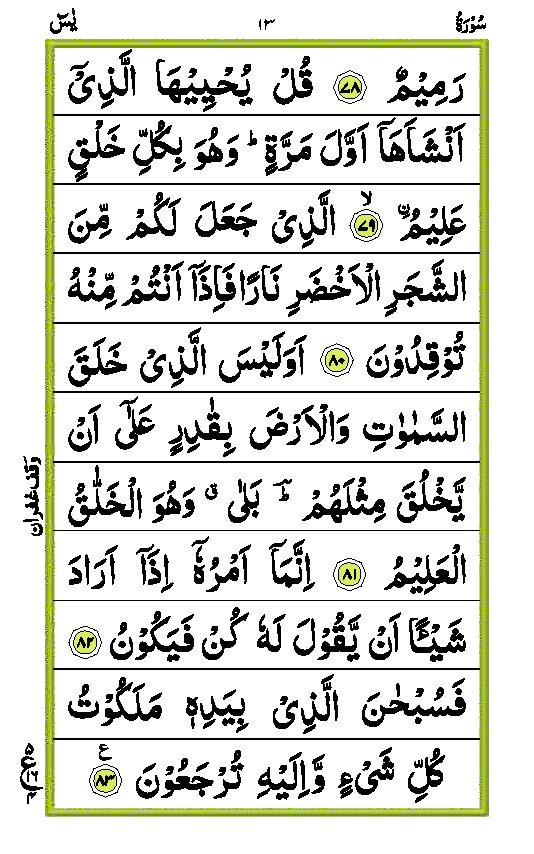