Quran Para 9 pdf download in high quality color format.  The ninth para of holy quran begins with the rest of Surah Al-A'raf and the same article is going on about Hazrat Shoaib (as) on which the eighth para is completed. The nation of Hazrat Shoaib had become blind in their love of wealth and had forgotten the distinction between haraam and halal. When Hazrat Shoaib gave them the Allah's command to weigh and measure in full, they said to each other that if you obey it, you will lose. Allah says that the real loss and loss was for those who denied Shoaib.

Allah said that I did not send a messenger to any city but caused distress to those who do not believe, so that they may humble themselves. Then We changed the pain into ease. It is said that if the inhabitants of the settlements adopt faith and piety, then Allah will open for them the gates of blessings from the heavens and the earth.

In this surah it is mentioned that Mosa (AS) came to Pharaoh's palace and when Mosa came to invite Pharaoh to Tawheed and Pharaoh showed disobedience then Mosa revealed the signs given by Allah. Even after seeing such clear signs of Allah, Pharaoh and his companions remained submissive and they called Mosa and Aaron sorcerers. It is further mentioned that Allah imposed various punishments on Pharaoh and his tribe. Allah sent down His punishment on them sometimes through the loss of fruits, sometimes through the rain of blood, sometimes through the rain of lice, frogs and sometimes through the rain of locusts. Each time the Pharaoh's family saw the torment coming, they promised to correct themselves, but when that torment was averted, they would return to disobedience until Allah drowned them in the sea for their disobedience. In this surah, Allah mentions that Mosa was given the privilege of being talk with Allah.
In Quran Para 9, Allah also mentions story of prohabiting a nation from phising on satureday. They set nets on Saturdays and caught fish on Sundays. In the end, Allah punished those who disobeyed and disfigured their faces and bodies and made them look like monkeys.
This surah also mentions that Allah has beautiful names and we should call Allah by these names. It is also narrated that people used to come to the Holy Prophet and ask when the Qiyamah will come. Allah said: Tell them that no one knows the Qiyamah except Allah.
At the end of this surah, the rights of the Qur'an states that when the Qur'an is being recited, one should listen attentively and remain silent. 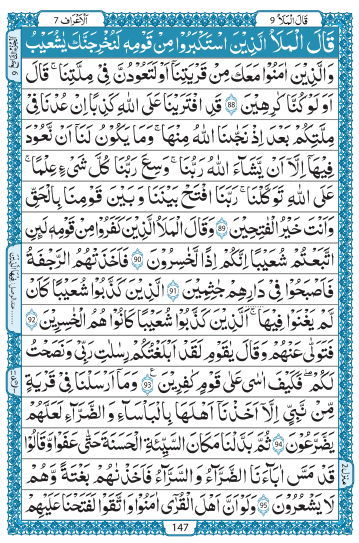